Without delving into too much detail about Danish foreign politics of the Cold War, it is important to remember that Denmark initially bound itself to a British sphere of interest. In the first decade of the Cold War Denmark aligned itself with Great Britain within NATO, bought a substantial amount of old British World War Two equipment, and planned on a number of future acquisitions. The reason for this is straight forward. Great Britain had since the late 1800s been the most important market for the agricultural surplus of Denmark (butter and bacon), and Britain had show itself during World War Two and immediately after as a ‘friend’ of Denmark and Danish political and economical interests. Hence it was no surprise that following the end of World War Two Denmark choose to support the British occupational forces in Northern Germany with a substantial number of troops. Since the Danish soldiers were part of the British forces they were supplied with surplus British uniforms and webbing from the war. Keeping with this initial choice the Equipment Commission tasked with procuring and developing new load bearing equipment for the infantry of the Danish army contacted the London based company Mills Equipment Company Ltd. The Danish army had found the British 1937 Webbing Equipment wanting. Especially the entrenching tool and water bottle.

The ‘Oppakningssystem’ M/45-50: Between 1946-1950 the Danish Equipment Commission and Mills developed a distinct Danish webbing systems based on components from several different British webbing sets. Most noticeably the equipment incorporated design details from the 1937 webbing, the 1940 cavalry webbing, and the 1944 webbing. The final pieces were added in 1950 and the entire load bearing equipment was named ‘Oppakningssystem M/45-50’ in Danish services. The LBE was meant to be used together with the US Garand Riffle introduced in Danish service in 1950. However, the US or Italian made Scabbards did not fit the British style belt, and a new ‘adaptor’ was designed that allowed the bayonet to be worn without altering the scabbard. US made covers for the entrenching tool and British bags for the Mk. II Lightweight Respirator was altered in Denmark to fit the belt. The US entrenching tool, cover, and the respirator bag were integral parts of the M45-50 Webbing Equipment.

The M/44 Uniform: The Uniform was a redevelopment of the uniform issued to DANFORCE (The Danish exile army in Sweden, 1943-45). Based on the British battledress the uniform had a distinct British look.

(Remember that it is possible to enlarge the below photos by clicking them!). 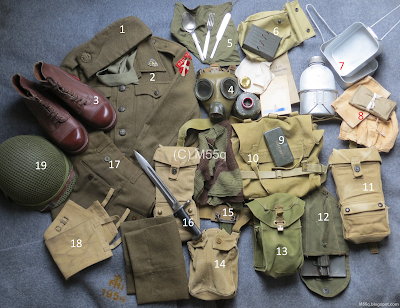 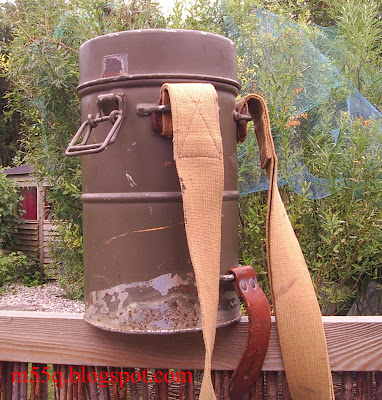 Until the 1930's Denmark had no gas masks of their own. All gas masks were purchased in other countries. Especially the French gas masks (A.R.S.) were popular with the army. There were different trials where the army tried to decide what type of gas mask they should order and what kind of carrier they should use. The army decided to order a Danish copy of the French A.R.S. - M.1917 and a metal sheet container. All masks and containers were produced in Denmark after 1930 / 31. 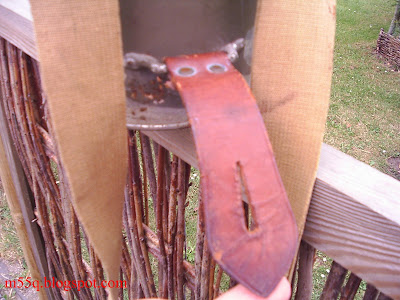 A close-up on the leather flap and the carrying strap. 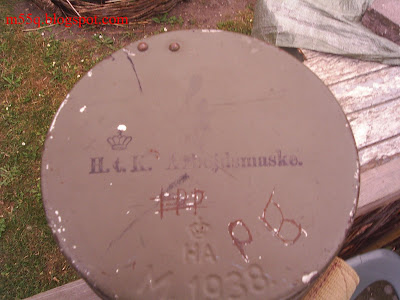 The lid on the container. All the stamps is an indicator that this mask served for a long time before it was made obsolete. 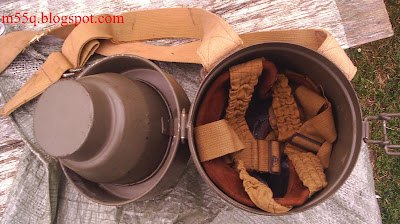 The mask is put inside the container with the filter first. On the left hand side you can see the spare part canister.
(Spare part canister contains: Extra filter, 2 - anti fogging disks, 2 - extra rubber rings and a cloth.) 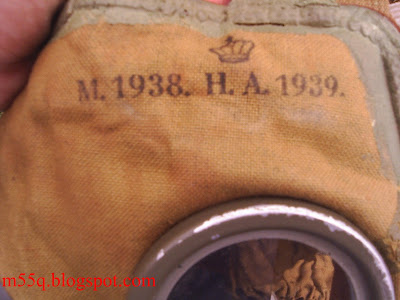 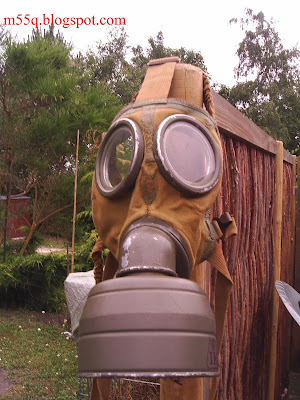 Front look with filter attached. The cloth protects the rather thin layer of rubber. 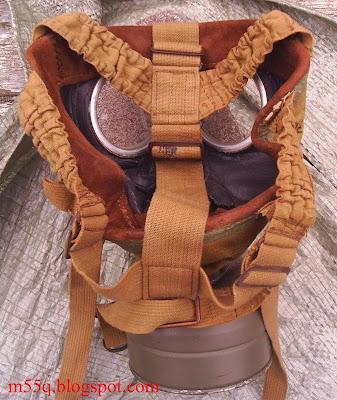 All the straps, hooks and brass bits. 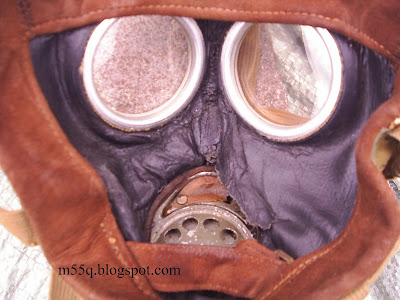 Inside view. The rubber is a bit fragile.
Eyes are made out of glass.
In the bottom you can see a chin strap. 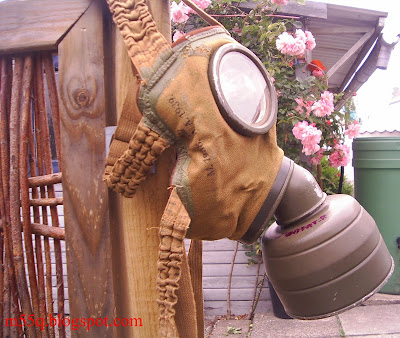 H.t.K = Hærens Tekniske Kommando. - Army Technical Command. The part of the army that purchased whatever the army needed. From spoons and socks to tanks and artillery. 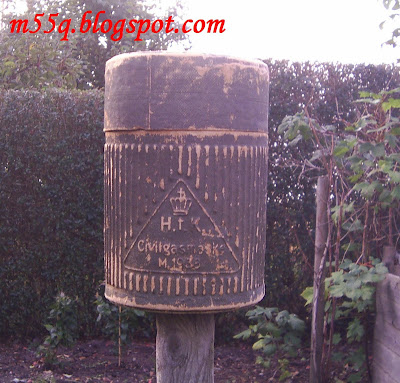 The M38 Civilian gas mask was developed one to two years after its army counterpart. They were distributed amongst the newly made air raid shelters (1940), volunteer fire-fighters, wardens, air raid personnel etc...

They were distributed by the army, and it was not possible for individuals to purchase their own mask. 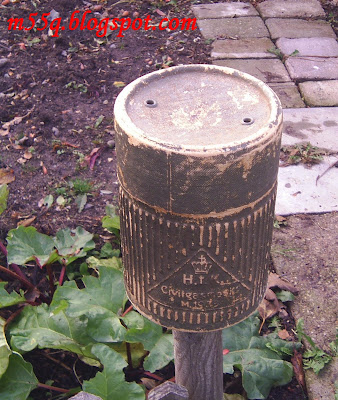 The card board container is painted in several coats of: Army standard green. It has reinforcing grooves on the side.
( In order to prevent it from collapsing if it were subjected to a pressure) 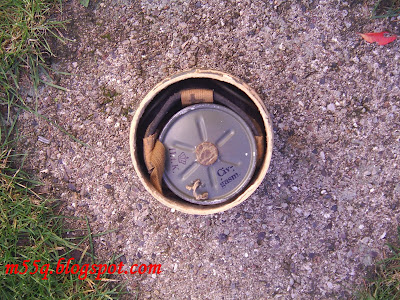 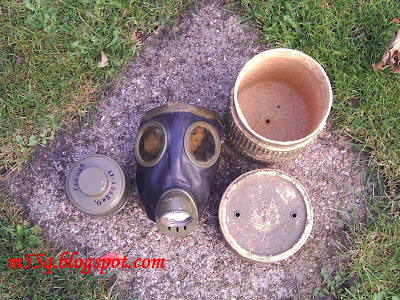 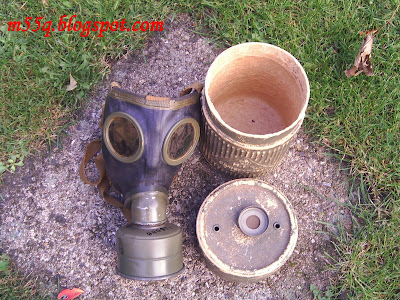 The filter attached to the mask. Notice the little cap on top of the lid. It prevents dust and water from getting inside of the filter, when it is not in use. 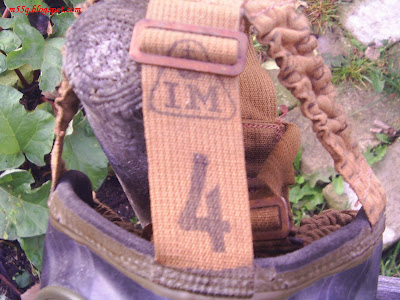 It's a size four mask. 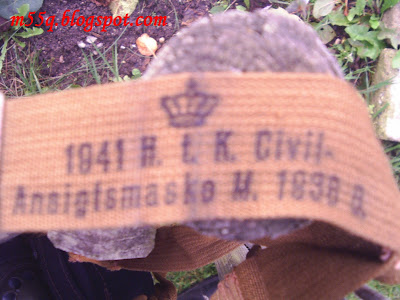 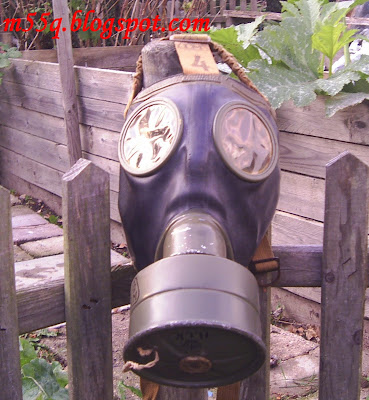 The front of the mask with the filter attached.
Notice that the eyes are made out of celluloid and not glass.
The filter is lighter and smaller than the army counterpart.


The civilian version is found in three different versions:

All of them got celluloid eyepieces and smal filters.
(The filters protects against: Smoke particles, dust, and gases developed from burning paint etc. - Not intended to protect against gases like mustard gas or CO2.)